Time building is a very fun part of flight training. You get to combine everything you have learned so far, improve IFR communications and refine flying skills. With a fresh instrument rating in hand, a new set of skills, and heightened confidence I was more than ready for time building. This is the stage in training where we fly all across Florida building the flight experience requirements for commercial certification. Instrument training is usually more intense, each lesson is packed with information and full focus is needed the whole time. Time building is a chance to enjoy flying a bit more and see how everything comes together.

There are several destinations that we go to as part of the time-building process from Wayman Aviation Academy. One of the first that most students go to during private pilot training and during commercial pilot time building is Immokalee Airport (KIMM). We do time building to get the required cross-country flight hours for the commercial pilot license. Most of the cross country occurs in stage IV which is the first part of the commercial pilot portion of the professional pilot program. Immokalee is very easy to get to and is only about 70 nautical miles away or about an hour of flight time on average. The airport often has other student pilots from around south Florida flying there for cross-country flights. Immokalee originally was an Army Airfield, initially beginning operations in 1942. B-17 and B-24 pilots trained there before going to combat. After the war in 1945, the field became a civilian airport. 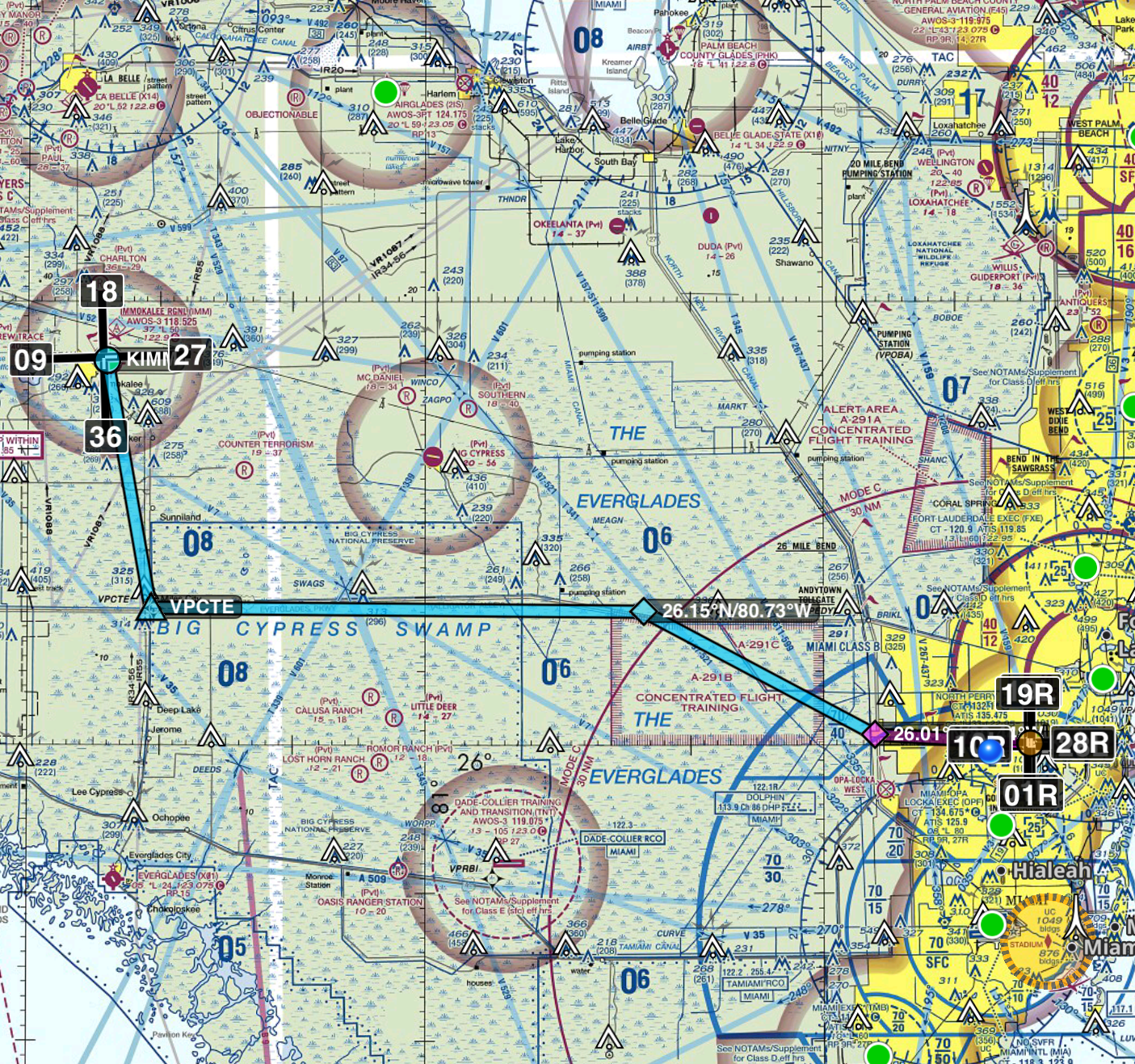 It has two runways, one running east to west and another running north to south so it is always easy to stay oriented.  After taking off from North Perry and heading west toward the first checkpoint I head northwest towards I-75 which runs east to west. I-75 is a good reference point and gives you a good place to land if any issues arise. It is always important to keep an eye out for traffic as well! Between the trailer park and I-75 is the training area, known on charts as an “alert area” and as we know from studying airspace, areas like that can be super busy. 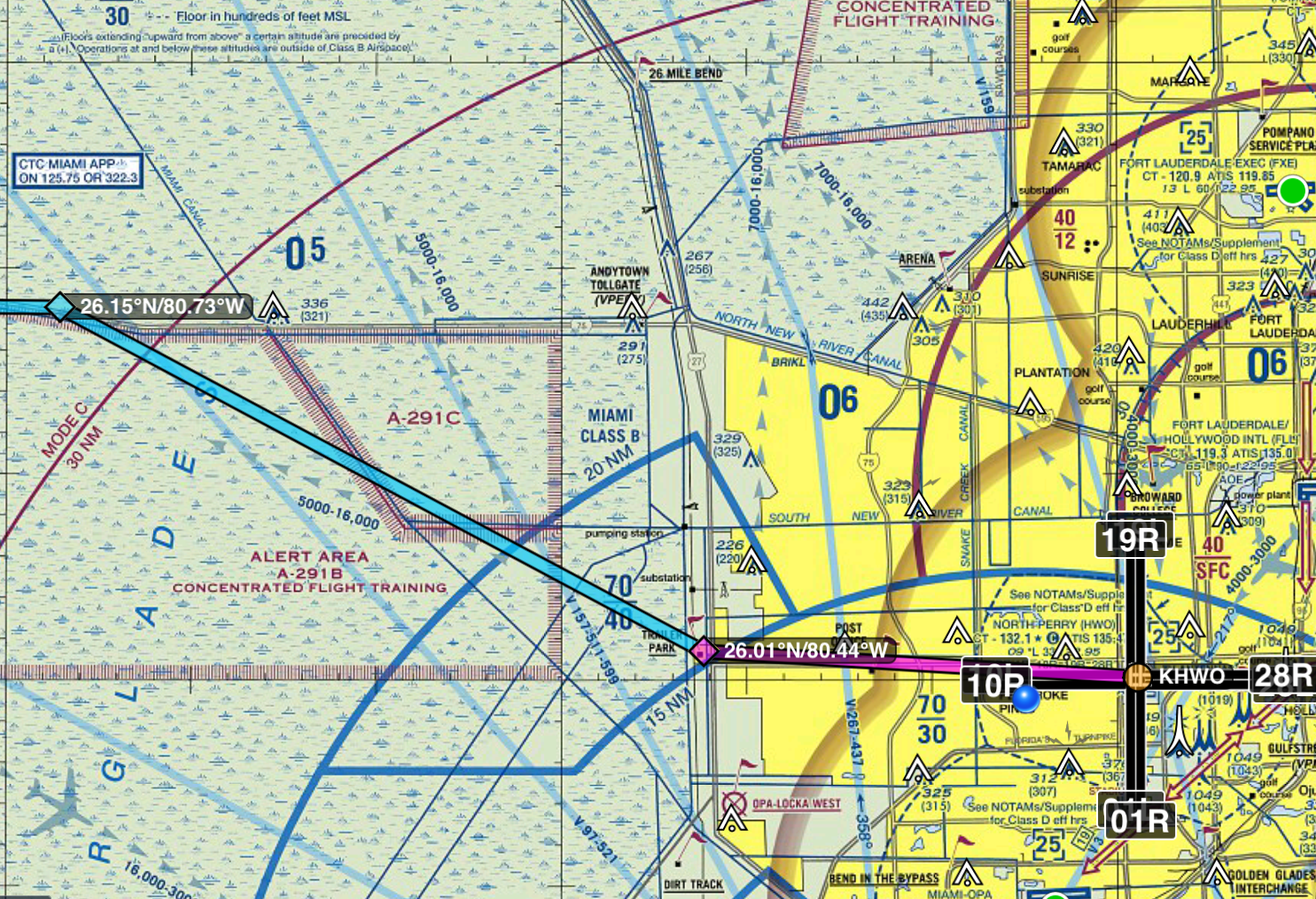 The rest is a very relaxing route with the everglades on the left and farmland on the right. I usually stay above 3,000 feet once clear of the practice area. Once over I-75 I head due west for a little over 30 minutes until reaching a VFR checkpoint called VPCTE which is right next to Miles City on the sectional charts. At this checkpoint, I turn north and from there I start getting ready for the arrival into Immokalee by getting the weather from the automated weather observation station (AWOS) and announcing my intentions on the common traffic advisory frequency (CTAF). 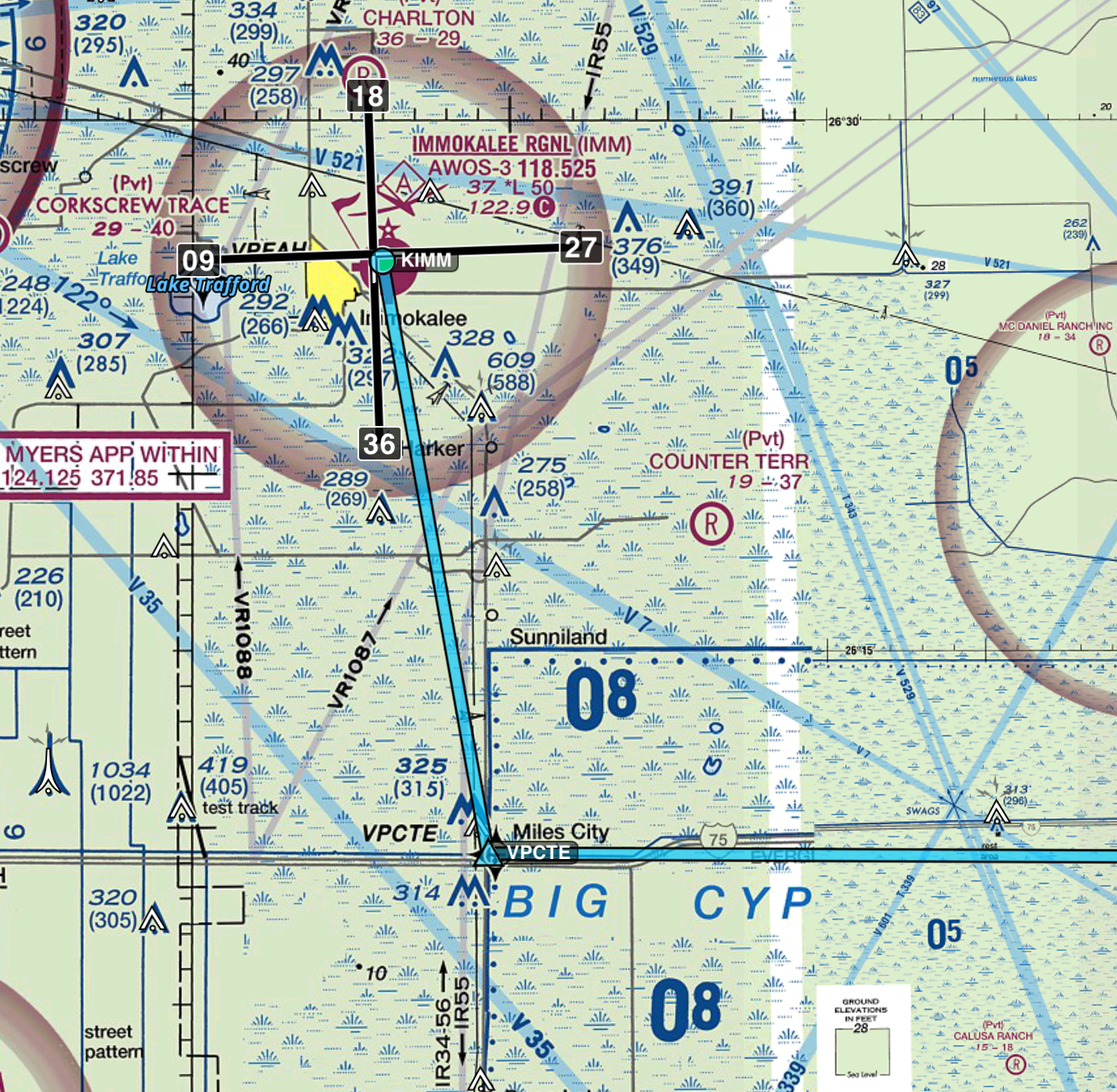 Traffic is usually light at Immokalee and the runways are long too. 5000 feet for runway 27/9 and 4550 feet for runway 36/18. Ample space for a 172 or 152. Sometimes there are turbine crop dusters on the airfield and there is a drag strip on what looks like an old runway that was converted. There are even RNAV GPS approaches for each runway.

From all the airports I have been to so far, Immokalee for some reason has always been one of my favorites. Next on the list of time-building experiences is Venice Municipal Airport (KVNC), it is right next to the Gulf of Mexico and was also an airbase in the 40s. What has been your favorite airport to fly to?