From Captain To President It wasn’t a perfect summer day in Florida, and it wasn’t a typical day at Wayman; the ones where the sun is shining, the grass is dry, students are walking in and out of the building and the sound of the starting engines of the Cessna’s, Pipers and Seneca’s roar through the air. No, it was a pretty wet summer day, which means people aren’t really flying much. However, it was the perfect day to sit down with Tony Shen, the president of Wayman Aviation. How did he end up here? What’s his favorite food? And how did he go from being a Captain on an Airbus 330 to president of Wayman Aviation Academy?

I knocked on Tony’s door, walked into his office and asked if I could interview him. There were some files on his desk that looked important and I thought he would say that he was busy but he replied “Sure thing, I can make some time now”. I quickly went through some questions I already had written down, got my laptop ready, which almost crashed during the interview, and I sat down for a personal one-on-one with the boss.

“I was born in Shanghai, China. It is the biggest, most developed city in China with a population of 23 million. Many of my western friends say it is their favorite city to visit in China.”

“I like spicy food. Anything spicy is my favorite.”

“Badminton, not so much anymore since I hurt my knee a while back.”

“I am the first generation of my family that became an aviator. It never crossed my mind of becoming a pilot until I was in college, then the airlines came to recruit pilots. That’s the first time I started thinking; I could actually become a pilot.”

“The college I went to was called Nanjing University of Aeronautics and Astronautics. I was majored in computer science. Then in my first year China Eastern airlines came to recruit pilots. In China the airlines recruit cadets and they pay for their training. I knew that was going to be much more exciting then computer science (laughs). I applied for it and  passed all the exams, which was very hard, I was lucky enough to pass.” “After that I had the chance to apply for a local pilot job, it was called Gulfstream International Airlines. And now they are Silver Airways. I was flying Beech 1900 for 2 years. Basically I am local, I got my license here, my first pilot job was here. Then I went back to China Eastern and started flying Airbus.”

“Unfortunately I have zero experience on Boeing, all Airbuses!”

“I really enjoyed the role and the responsibility. Because you know you are responsible for millions of dollars of assets and hundreds of lives.”

“Being away from family. When I was young I didn’t care to much about it. But since I now have kids and a family and you are away for weeks it’s tough.”

“Of course, the thing that I miss the most is not just flying the airplane, but the feeling of being responsible for a lot of people.” Tony, the Wayman family and others

“I’ll have to chose David.”

“I guess because all my life I have been doing aviation related things. I am really interested in the airline business. If I could have a lunch with him I could ask him alot about aviation and how to do business.”

“I was very lucky to be promoted to Captain very quickly, the reason being that in China, because of the huge pilot shortage, you fly a lot more. Your hours get accumulated very fast. At 33 years old I was a Captain on the Airbus 330 and a training manager. When your job is just sitting in the cockpit for 14-hour international flights month after month, I started wondering, do I want to keep doing this for the rest of my life? Or do I want to try something different, something maybe a bit more challenging for myself? I knew I am into business, my father is an entrepreneur. He used to manage factories and companies. So it’s in my blood. I wanted to take on new challenges. I am very interested in the business side of this industry.”

“Yes, I knew I needed to learn before I can actually do something and getting an MBA seemed like the right thing to do. Yes, I applied for Duke University. My wife also went to Duke and I was lucky enough to get in. I spent 2 years there. I learned a lot. I actually was their first airline pilot at the business school. That was quite a challenge. Because compared to my Wall Street classmates I knew very little about business (laughs). During my summer internship I worked for Vanguard, after graduation I got an offer to work at American Airlines. I worked in their headquarters as a financial analyst. That seemed to be the best position for me at that time. I worked on different projects including alliances, route profitability, route planning and more. A lot of exciting projects. I learned a lot.”

“After I quit my job at American Airlines I went back to Shanghai to become a real entrepreneur. A couple years later I saw that general aviation started booming in China, I felt that pilot training would be the first business within general aviation that should succeed. No airplane can fly without pilots, and there is clearly a pilot shortage there. At that time I met with a friend who is my boss now actually, the chairman of Chiway Group. He also wanted to get into the general aviation business. I told him that the right thing to do is to establish a training base in the US. We started looking for the right candidate school. After a lot of research we chose Wayman.”

“It was through a common friend, who is also a very successful businessman in aviation.” Tony giving a speech during the groundbreaking of the new building

“First is location, Florida being the ideal place for flight training. And my aviation career started here too, there is a strong bond between Florida and myself. Wayman is also very good for it's size, reputation and most importantly their management. When I met the Wayman family I knew I liked them. They succeeded not just by being smart in the business, but by being honest and passionate. We also seem to have very good chemistry. For those reasons Wayman became our top choice. And we definitely made the right decision.”

“This year? This is the second year after we acquired Wayman. We have made a lot of improvements and worked on a lot of important projects. At the end of this year we should hit a couple of very important milestones; first, we should be certified by CAAC (Civil Aviation Administration of China). Second, we should receive the first group of Chinese cadets. Further, our new facility should be done by at least 70% by the end of the year. That would set a good stage for the next ten to twenty years of growth for Wayman. We’ll also have a new ramp, which is four times bigger than our current ramp. Also we should really progress for our accreditation as we are aiming for becoming an accredited Academy next year.”

“Yes, we made investments to not only buildings, ramps and airplanes but also recruit talents. We should be prepared for the next few years.”

“Yes, sort of like a boutique style of Embry Riddle, more personal and more focussed on 3 to 4 majors.”

“It is great if you can grow with an academy and be a witness of your school's success and growth. After you graduate, and you look back and you can say, that was my school, and I am proud to be a part of it.” 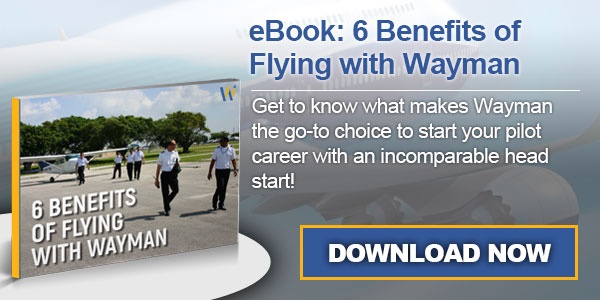